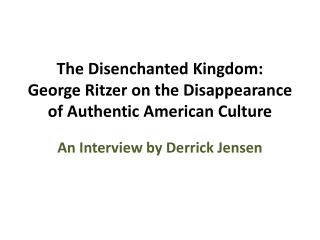 The Disenchanted Kingdom: George Ritzer on the Disappearance of Authentic American Culture The Disenchanted Kingdom: George Ritzer on the Disappearance of Authentic American Culture

Characteristics of Kingdom Fungi - . the kingdom fungi includes very important organisms, both in terms of their

Authentic Materials in the Classroom: Their use to advance communicative competence - . bryan meadows ph.d. student,