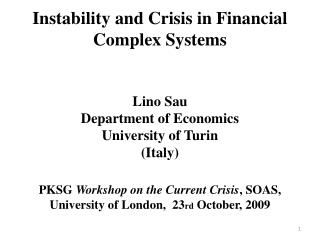 Giuseppe Biondi Zoccai, MD Division of Cardiology, University of Turin, Turin, Italy - What matters in the eyes of

SCFB Transformation Story… from IMF to recent financial crisis for SNU students - . may 15, 2009. “ banks are

Financial Reporting and Regulation in a World of Financial Engineering: Accounting and the Global Financial Crisis

The Financial Crisis: Lessons for Developing and Emerging Market Countries - . ugo panizza. outline. was it a surprise?

The Global Crisis and the credit crunch - Green economics institute. reclaiming economics for people, the planet,

The Econophysics of the Brazilian Real -US Dollar Rate - . sergio da silva department of economics, federal university of