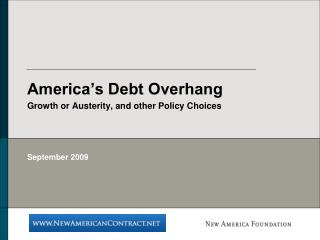 America’s Debt Overhang Growth or Austerity, and other Policy Choices America’s Debt Overhang Growth or Austerity, and other Policy Choices. September 2009. The bursting of the housing and credit bubble has left the United States with a large debt overhang. America’s total debt is at a historical high of 373% of GDP.

America’s Debt Overhang Growth or Austerity, and other Policy Choices

Domestic Debt: The New Front of Debt Crisis in Africa – The Case of Kenya - . presented by kiama kaara programmes

EXPERIENCES OF DEBT AUDITS An alternative to the crisis Maria Lucia Fattorelli Seminar Debt and Austerity: From the Glo

Reforms and macroeconomic policy under Gorbachev (1985-91) - . overview of gorbachev reforms soviet economy on the eve of

The State of Lending in America : Debt-Trap Lending and its Impact on American Families Debbie Goldstein , Susanna Mo

Discussion: ‘are there policy alternatives to Ireland’s austerity?’ - . response to stephen kinsella (university of

Reducing debt levels without austerity: a Eurobond swap - . marcus miller university of warwick may 2012. evidence of