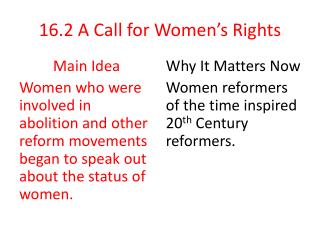 16.2 A Call for Women’s Rights. Main Idea Women who were involved in abolition and other reform movements began to speak out about the status of women. Why It Matters Now Women reformers of the time inspired 20 th Century reformers. Standards.