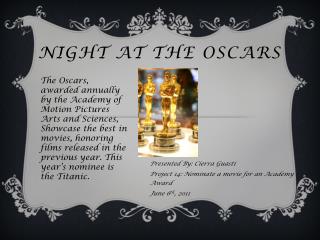 Night at the Oscars Night at the Oscars. The Oscars, awarded annually by the Academy of Motion Pictures Arts and Sciences, Showcase the best in movies, honoring films released in the previous year. This year’s nominee is the Titanic. . Presented By: Cierra Guasti Project 14: Nominate a movie for an Academy Award

Night at the Oscars

YALDA NIGHT - . celebration of the longest night. “ yalda ” is a syriac word means birth. this night is dedicated to

Starry Starry Night - . by: angie bowen. rotation vs revolution. revolution a complete trip of the earth around the sun.