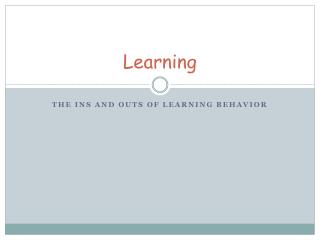 Positive Behaviour for Learning INTRODUCTION - . p ositive b ehaviour for l earning. pbl is … a broad range of systemic

LEARNING - . how do you learn best??. ivan pavlov and the role of serendipity. russian physiologist studying the

LEARNING - . learning - key points. what is learning? how do we learn? classical conditioning operant conditioning

Why Mobile Learning Is The Future Of Workplace Learning (Infographic) - You must have heard this before, but know first