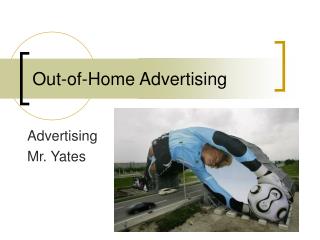 Out-of-Home Advertising. Advertising Mr. Yates. What is “out-of-home” anyway?. Out-of-home is literally any form of advertising that reaches a consumer out of their home. Hence, it is in contrast with broadcast, print, and internet advertising. So, like billboards?. Out Of Home Advertising For UBER - Global advertisers, india’s finest outdoor agency has been roped in to promote taxi