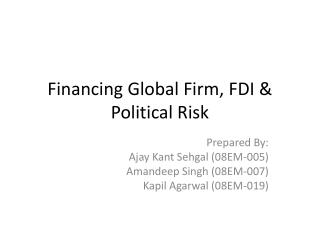 Prevention of Money Laundering and Terrorist Financing - . 22 june 2005. outline of our legal seminar. what is money

OUTLINE OF CHAPTERS 1-2 - Current multinational challenges and the global economy and corporate ownership, goals and

OUTLINE OF CHAPTERS 1-2 - Current multinational challenges and the global economy and corporate ownership, goals and

Capital Structure - . what finance functions add the most to firm value?. corporate financing. we have been focusing on

RISK TRANSFER SEMINAR - . ycparmia training 2006 learn more about us at: www.ycparmia.com. purpose. the object of risk

Political Machines - . what is a political machine?. an organized group that controlled the activities of a political

Chapter 4 - . bond risk. bond risk. investment risk is the uncertainty that the actual rate of return realized from an

Review Part 11 Political Parties &amp; Political Action - . 1) which of the following defines a team of men (and