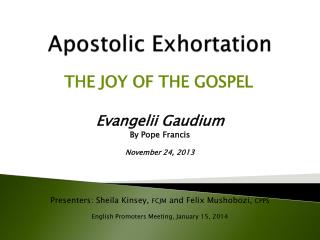 Apostolic - . vocabulary from youcat. dogma. an article of faith proclaimed by a council or the pope as divine revelation

APOSTOLIC - . apostolic. not a religion james 1:27 pure religion and undefiled before god and the father is this, to

Apostolic life - . rcia network of e&amp;w. 75/4. since the church’s life is apostolic, catechumens should also

Pastor Tutu - Exhortation - . the story of the lepers. they called a conference they decided to leave their comfort zones

Exhortation to the Faithful - . jude 17-19 but ye, beloved, remember ye the words which have been spoken before by the