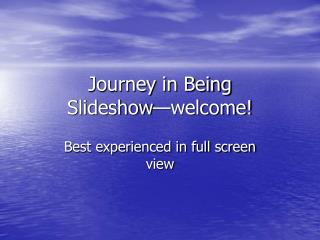 Welcome - . to. jeopardy!. directions. to begin the slideshow from the beginning, select “slideshow” and “view

Differentiating Instruction: The Journey - . &quot;in the end, all learners need your energy, your heart and your

Slideshow Science Day: More 2 Explore - This slideshow has been used at the science day of the hanze highschool of

Binary Trees, Binary Search Trees, and AVL Trees - . this is a powerpoint slideshow with extensive animation; it is meant

Chemical Reactions: Predicting Products and Balancing - . this powerpoint presentation will be far more effective if you

Safer Injection Slideshow - . part two…. this slideshow contains images, text, and information that was gathered from

COM A Slideshow of Epic Proportions - Sean baxter http://www.eburg.com/~baxters/ what is com? a standard for