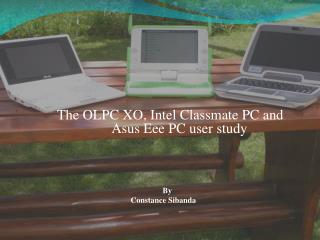 The OLPC XO, Intel Classmate PC and Asus Eee PC user study By Constance Sibanda. Background [1]. ICTs have become one of the crucial building blocks for a better education ICT in education is the application of technology within the context of education Constance spiekemier - . constance was born on october 30, 1930, in fargo, north

Evaluations in OLPC What for ? What has been done ? What could be done ? - . pierre varly, independent consultant

Asus Technical Help and Support - Get world class solutions for your asus products with various errors. call on asus