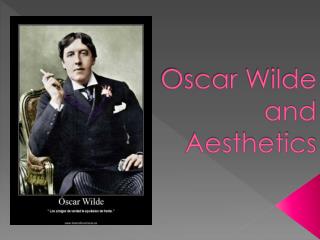 Oscar Wilde - «to live is the rarest thing in the world. most people exist, that is all». oscar wilde. oscar wilde in a

The Importance of Being Earnest ~ Oscar Wilde - . some key terms for this text. irony , word play (puns), understatement

ADULT ORTHODONTICS - . dr. fitri octavianti department of orthodontics usim. what will you learn?. indications and

Oscar Wilde - . dramatist, poet, novelist and essayist, spokesman for the school of “art for art's sake”, the leader

Oscar Wilde - . presentation about this writer.

“The picture of Dorian Gray” by Oscar Wilde - . oscar wilde. “ beauty is a form of genius -- is higher, indeed,

Oscar Wilde - . “i am so clever that sometimes i don’t understand a single word of what i am saying”. “it is only

Thinking about Aesthetics - . think about:. “bad art is a great deal worse than no art at all.”-oscar wilde do you

Oscar Wilde, The Picture of Dorian Gray - . *a very brief overview of oscar wilde and his perspective on aesthetics.

Aestheticism “Art for art's sake” - . what ? the aesthetic movement, part of the decadent movement where ? europe