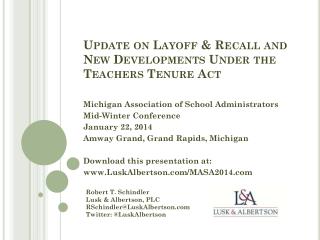 Perencanaan SDM (HR PLANNING) - . hr planning. what is hr planning?. why is it rarely done?. what is the connection

FY ‘02 Update &amp; FY ’03 Request - . presentation on the personnel divisions to the administration and

Welcome to Stoner Prairie Elementary! Verona Area School District - . student code of conduct. i will behave in a way

Why were PERA and SB7 passed? What will be the consequences? - . dr. richard voltz, associate director illinois

Removal of Tenure Teachers for Incompetency - . by: renee wright april 2010. tenure. originated around the turn of the