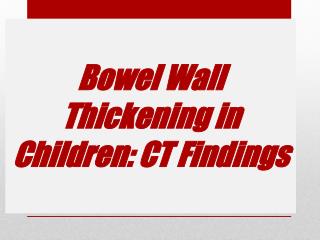 The Small Bowel - . learning objective 1.describe the normal anatomy of the smal bowel 2. discuss the physiology of

WALL - . wall. wall is a continuous, usually vertical structure, thin in proportion to its length and height, built to

Alterations of Neurologic Function in Children - . chapter 19. structure and function of the nervous system in children.

The Alimentary Journey - Irritable bowel syndrome in pregnancy and beyond. janice joneja, ph.d., rd. the alimentary

Bowel Cancer - . the statistics in this presentation are based on the bowel cancerstats report published in 2007.