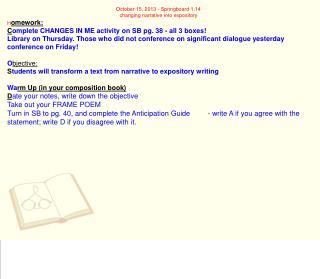 October 15, 2013 - Springboard 1.14 changing narrative into expository H omework: C omplete CHANGES IN ME activity on SB pg. 38 - all 3 boxes! Library on Thursday. Those who did not conference on significant dialogue yesterday conference on Friday! O bjective:

Modeling Rich Narrative Content - A confab intensive workshop on narrative modeling (aka, how to avoid the horrors of raw

Cross-Codes Forum 18 October 2013 - . evacuation muster point. if there is an alarm, follow the instructions of the fire

The Narrative Paragraph - . narration is a piece of writing that tells a story of an event or experience. it’s usually