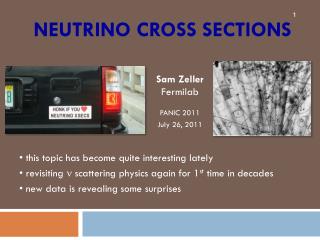 Cross Section of the Eye - . review of important terms. the outer surface of your eye where light enters is made of a

Direct Measurement of the NuMI Flux with Neutrino-Electron Scattering in MINERvA - . jaewon park university of rochester

Neutrino-nucleus cross section measurements at the SNS - . yu efremenko. on behalf of the - sns collaboration.

Preliminary Ideas for a Near Detector at a Neutrino Factory - . neutrino factory scoping study meeting 23 september 2005