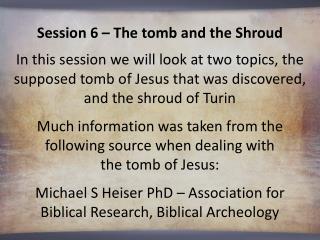 Session 6 – The tomb and the Shroud. In this session we will look at two topics, the supposed tomb of Jesus that was discovered, and the shroud of Turin. Much information was taken from the following source when dealing with the tomb of Jesus:. Biblical Archeology 101 - I finished the masada virtual tour teaching a couple days ago but as i reviewed it, i thought

A Brief Survey of Biblical Eschatology - . christ, culture, and the future. introduction: a few opening comments and my

Great Expectations - . chapters 40 - 49. chapter 40. abel magwitch’s name alludes to a biblical character. how is this

Abuse In The Church: - Biblical, legal, &amp; counseling perspectives. when good people do nothing: why we fail to

Abuse In The Church: - Biblical, legal, &amp; counseling perspectives. when good people do nothing: why we fail to

Biblical Interpretation II - . the meaning of the epistles. how hard can it be to read and understand personal

The Meaning of Passover - . grace and shalom to all. my name is gavin finley and in this video we shall be taking a