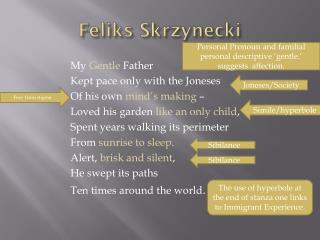 Feliks Skrzynecki. Personal Pronoun and familial personal descriptive ‘gentle.’ suggests affection. My Gentle Father Kept pace only with the Joneses Of his own mind’s making – Loved his garden like an only child , Spent years walking its perimeter From sunrise to sleep .

AOS – Skryznecki - . karen yager – knox grammar. the concept of belonging. how do you view the notion of belonging?

Feliks Skrzynecki - . the poem details persona’s reflection on the father he deeply loves and respects. it describes

Low-frequency variability in the mid-latitude atmosphere induced by an oceanic thermal front: - Application to the north