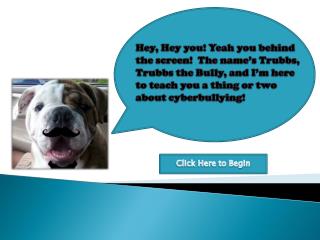 Hey, Hey you! Yeah you behind the screen! The name’s Trubbs , Trubbs the Bully, and I’m here to teach you a thing or two about cyberbullying !. Click Here to Begin. What is Cyberbullying ?.

Activity: Grammar, Punctuation, and Capitalization Click on the audio symbol below to begin. - Activity: grammar,

Lets Begin! - . click above to begin. introduction to the buttons. help button. print button you must be connected to a

TO BEGIN PRESS F5 - . accessing e-books and e-journals. this course is for anyone who would like learn how to find and

Using Semicolons Correctly - . goal : i can correctly use and identify semicolons in a sentence. click here to begin.

Introduction to the Human Body - . your independent exploration of the human body. click here to begin!. back.

1. Begin at the eInstruction Home Page: www.einstruction.com - 2. click on the “ students ” button. 1. begin at the

Login as an Authorized User Begin at: www.usu.edu Click MyUSU – ( third link across the top of the page) Click Login

Personal Finance Final Exam Review - . click here to begin. final exam review. once you work through the questions, you

Colors of the Rainbow Click here to begin - . what are the colors that are in a rainbow?. red orange yellow green blue