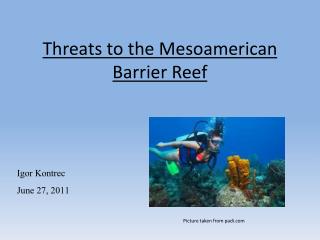 Threats to the Mesoamerican Barrier Reef

Threats to the Mesoamerican Barrier Reef

How to Study Big Fish in Hawaii - . to start, let’s see what you already know…. answer these pre-assessment

THREATS TO THE CORAL OF THE MESOAMERICAN REEF - . nicole grainger. the mesoamerican reef. 225 million years 1 000

The Effects of Global Warming on The Great Barrier Reef - . by julie pfeifer katie jones and temperance carter.

CORAL REEFS - . the tropical rainforest of the sea…. what was the video about?. where did nemo live?. what were some of

The Coral Reef Early Warning System (CREWS) - . an expert system for near real-time monitoring of conditions conducive to

Environmental Threats - . ecosystems in crisis…tourism in crisis. threats. brainstorm a list of natural and human

T he Mesoamerican Reef - . threats to the great ecosystem, and solutions to the issues. by: jessica allingham.

Mesoamerican Barrier R eef - . by: darcee stock. as defined by the new oxford american dictionary, overfishing is the

THE GREAT BARRIER REEF - . just a little poem. beneath the breaking waves, a world within the depths of

The Mesoamerican Barrier Reef - . “we need to start looking at having a way of managing the whole ecosystem, because

Coral Reefs - . by harsha lakamsani. introduction. coral reefs are made of limestone structures of dead and living stony

The Mesoamerican Reef - . how global warming and overfishing are threatening the life of this astonishing reef. the