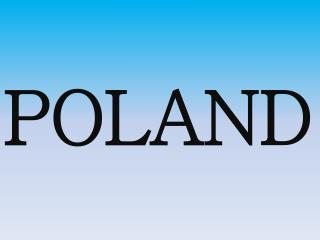 Poland - . the capital of poland is warsaw. it is located in the centre of our beautiful country. poland. in poland there

Poland - . my country. hi! my name’s caroline. welcome to a tour around poland. poland is a country in central europe.

POLAND - . by: julia, aleksandra, nicole. where is poland located?. poland is located in the middle of europe near the

Barnaby Bear Goes to Poland - . here he is packing his case!. he looks at the atlas to find out where he is

Where is Poland? - . poland – national symbols: coat of arms and flag. the repablic of poland. the total area of

Poland - . what can you tell me about poland?. kwl sheets. a kwl table is away of finding out what we know about a

Poland - . the flag of poland. the map of poland. poland in europe. finland. romania. italy.