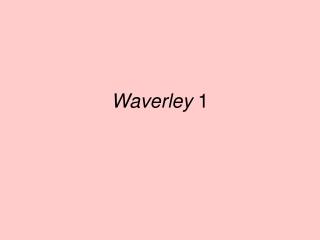 Waverley CAB-thoughts on where we are and what we need to do - . february 2013 trustees meeting. where we are now. top

Framing Scott and Waverley - . the invention of the historical novel . questions for discussion . how is this novel

Walter Scott Waverley 1814 Seminar 2 - Why is waverley so important in the development of the english novel . . .. the