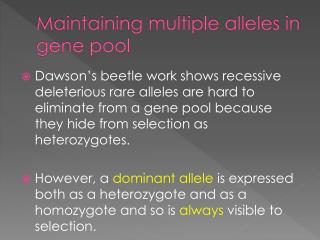 Maintaining multiple alleles in gene pool. Dawson’s beetle work shows recessive deleterious rare alleles are hard to eliminate from a gene pool because they hide from selection as heterozygotes . Multiple Alleles - . allele = ( n) a form of a gene which codes for one possible outcome of a

Population Genetics - . definitions of important terms population: group of individuals of one species, living in a

Linkage and Gene Mapping - . locus = physical location of a gene on a chromosome homologous pairs of chromosomes often

Multiple Allele Traits - . some traits are determined by more than two different alleles. some traits have multiple

Codominance and Multiple Alleles - . most genetic examples that we look at involve alleles that are dominant and

BIO 10 Lecture 12 - . evolution: from gene to protein to phenotype. definitions for evolution. “any change in the

Genetics Terms - . gene = a section of dna (on a chromosome) that codes for a specific trait alleles = alternate forms of

Introduction - . population = an interbreeding group of the same species in a given geographical area gene pool = the