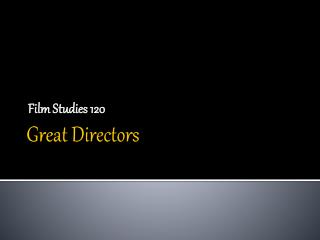 CABE BOARD OF DIRECTORS - Cabe board meeting february 22, 2014. cabe board of directors. welcome!!. multilingualism!.

Auteur Theory director as author - . the dictionary definition of auteur states that the director of a film . ‘…

Buddy Films - . characteristics. the main characters are usually two men (that’s what makes a movie like thelma and

Key Problems in the British Film Industry - . objective. understand the difficulties faced by producers in the british

Your Board of Directors Votre Conseil d'Administration - . board meeting. dec 9, 2010 at 7.30pm at the club house.