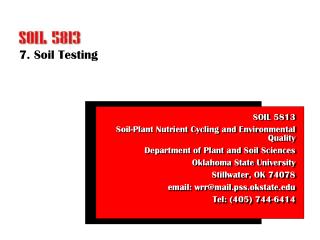 Soil Testing - The soil can contain a lot of contaminants over time. doctoraujla environmental consultants detects and

Testing Soil pH - . focus questions. is there a connection between the ph level of soil and the amount of humus (organic

Benefits Of Soil Testing - Pdf about benefits of soil

Soil Testing South Gippsland - The 4spheres is one of the leading providers of soil testing in south gippsland. our

Soil Testing Equipment Exporter - Looking for agricultural soil testing equipment exporter? then you are at the right