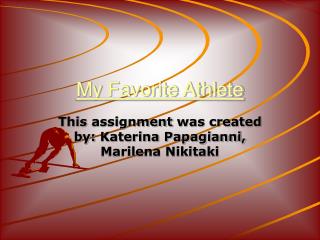 My Favorite Athlete. This assignment was created by: Katerina Papagianni, Marilena Nikitaki. Nikos Kaklamanakis. Nikolaos "Nikos" Kaklamanakis is the Greek Gold-medal winner who lit the Olympic torch in the opening ceremony of the 2004 Summer Olympics in Athens . MY FAVORITE - . philosophy. a man with one watch knows what time it is;. a man with two watches is never quite sure.

MY FAVORITE - . philosophy. (en sevdiğim felsefe). a man with one watch knows what time it is ; (tek saati olan saatin

My favorite - . by mayela gzz . my favorite color is the pink ,i love it for me is the best color. i think is a color

My favorite… - . school subject-gym. i only have gym on day a we play games in gym gym is so fun. color-red. red is a

MY FAVORITE THINGS - By : juan carapia. my favorite things. something about me!!! . i'm amazing !!!. my favorite music

My favorite school - Regional specialized school no. 8 for gifted children is situated in the city of oral, west

My Favorite Foods - . by britney. meat/beans. chicken nuggets/ steak. i like steak because it’s juicy and yummy and

My Favorite Toy - . draw a picture and describe a favorite toy from your childhood. ... toys. classic toys: favorites of

My Favorite Pet - . my favorite pet is my dog, romeo. he is beautiful and easy to care for. playing with him is lots of

My favorite things - . my music. diamonds. favorite player. like to dress. dogs. shoes. i like to listen when i'm about o

MY FAVORITE ROOM - . abraham salas aldana. my favorite room is my bedroom . you can found:. a bed. wardrobe. windows. an