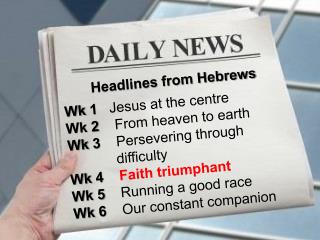 Why Did Jesus Come to Earth? - . not for a vacation not for a change of scenery not as a glutton for pain not for merely

Overcoming Discouragement - . discouragement due to trials in life. deuteronomy 1:21 look, the lord your god has set the

Hebrews 2 - . responding to revelation 2:1 we must pay more careful attention, therefore, to what we have heard, so that

JESUS, CREATOR OF HEAVEN AND EARTH - . lesson 1 for january 5, 2013 . the testimony of creation. “ the heavens declare

Shabbat Shalom Welcome to House of Israel’s Shabbat Service - . freedom in messiah “the truth shall set you free”.

The Letter to the Hebrews - . chapter 9 jan-apr 2014 fxcc. hebrews 8 and before. jesus is greater than angels moses

HEBREWS - . hebrews. “the writer . . . encourages them with the assurance that they have everything to lose if they

Revelation 21:1-2 - . now i saw a new heaven and a new earth, for the first heaven and the first earth had passed away.