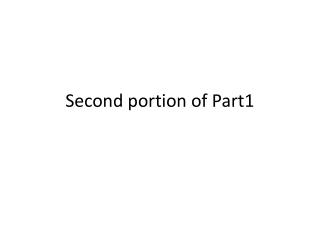 Second portion of Part1. Processing to near the water surface. Previous slides show the improvement of air motion retrievals when accounting for the strong and coexistent surface returns. Portion - . control. eating right every day. the number one rule in good nutrition remains: eat a balanced diet with

Trees-part1 - . trees. a set of nodes with a single starting point called the root each node is connected by an edge

Convection Part1 - . external flow. introduction. recall: convention is the heat transfer mode between a fluid and a

Castles part1 - . the different structure of castles- development of the castle. recap. what did we concentrate on last

Continue portion of Protein - . the biological function of protein is due to the three-dimensional structure which

Portion Size - . a major key in being in compliance. now is the time to be accurate. the new rules. smart question. 9-12

Portion Distortion - . information from us department of health and human services compiled by martina tayek, resident

Portion Distortion - . how food portion sizes have changed in 20 years. slides marked by are adapted from “portion

Portion Distortion - . information from us department of health and human services compiled by martina tayek,

Portion Control - . hazards of obesity. yellow- globules of fat. 5lbs of fat vs. 5lbs of muscle. 10 teaspoons of sugar