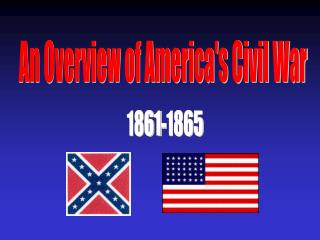 An Overview of America's Civil War. 1861-1865. Why? A Very Brief Review. Southern states believed that the union no longer protected their rights or promoted their welfare. Specifically, they worried that Northern restrictions on slavery would undermine their way of life. Why secession? . Overview of the Leahy-Smith America Invents Act - . the practical effect of the aia and its proposed regulations. june

The CIVIL War. - The civil war. the war between the north and the south.