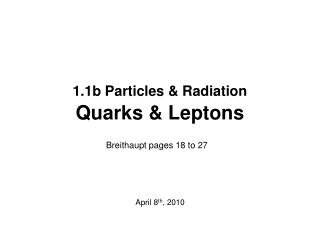 Radiation Detection and Monitoring - . radiation detection and monitoring. by: todd bailey. purpose of the four part

The History of Particles: Progression of Discoveries - . review of concepts, progress, and achievement from atoms to

The proportionality can be replaced by an equality: - Quanta : the smallest quantity of energy that can be emitted in the

Properties of Gases Chpt. 10 - . a quick review matter is anything that occupies space and has mass there are three

THE RULES OF RESIDENCE - . quark : the smallest known particle, which is a part of all matter. quarks experience strong