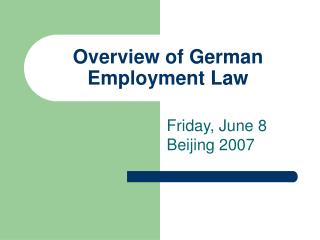 The Holocaust: An OVERVIEW - . two german jewish families at a prewar gathering. only two of them survived holocaust.

Improving Employment Outcomes for Individuals who are Blind or Visually Impaired: - . an overview of six research

GERMAN Cuisine - . the third largest country in european union lies in the heart of the europe four regions northern