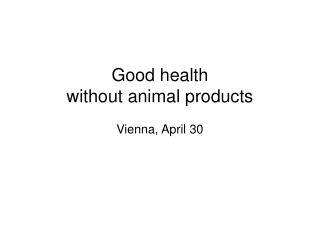 Good health without animal products Vienna, April 30. Animal products are not needed for excellent health. The longest living group of people in the world are US Seventh Day Adventists. US Adventist vegetarians who drink milk live about two years longer than non-vegetarians.

World Organisation for Animal Health - . seminar on the dialogue and common activities between the oie member countries

Gustav Klimt - . born in vienna, in 1862, into a lower middle-class family the late 19th century one of the founders and

HEALTH - Everything gets better. wealth. health. you. understand. if there is not mass consumption of products at street

Ed Richey, DVM Gainesville, Florida - . to make animal health programs work: 1. they must be simple 2. they must fit

WHO Good Distribution Practices for Pharmaceutical Products - . presented by: director of pharmacy affairs u.s. food and

Bioterrorism Awareness: Protection of Human and Animal Health - . human health professionals. why are we here?. september

Bioterrorism Awareness: Protection of Human and Animal Health - . companion animal veterinarians. why are we here?.