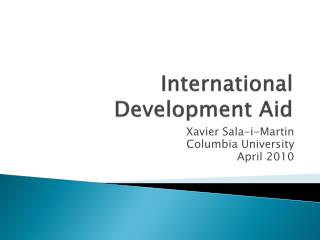 International Development Aid. Xavier Sala-i-Martin Columbia University April 2010. Heated Debate. Aid has some positive effects on growth (Jeffrey Sachs 2004) and needs to be multiplied. Aid has effect on growth, only under some circumstances (conditional aid) International Aid and Tanzanian Development - . prepared for the conference on 50 years of development in sub-saharan

Development Aid - . group brainstorm. a nigerian once said, â€œif the developed world sends money, it is only

Development Aid - . group brainstorm. a nigerian once said, “if the developed world sends money, it is only