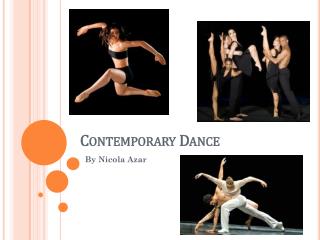 Popular Dance Styles - Dance is a type of art that generally involves movement of the body, often rhythmic and to music.

MODERN DANCE - . a reaction against ballet. the early 1900’s-1930’s embraced the careers of american dancers who

Modern Dance Pioneers - . a brief history of modern dance the creation of an art form. why was modern dance different?.

Characteristics of Contemporary Dance - . different styles of dance have a particular way to produce or perform movement.

Hallo! This is dance! - . contemporary dance as a method of aggression preventing. children and youth. presentation