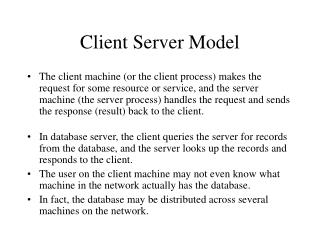 Client Server Model - . the client machine (or the client process) makes the request for some resource or service, and

Client-Server Model of Interaction - . chapter 20. we have looked at the details of tcp/ip protocols router architecture

The Client-Server Model – part 1 - . introduction. the client-server paradigm is the most prevalent model for

The Client-Server Model – part 1 - . m. l. liu. introduction. the client-server paradigm is the most prevalent model

Client/Server - . why things are as they are. i am going to sketch a bit of the history of client/server as well as

Client/Server Networking - . protocol stack summary. “turtles all the way down” each layer uses the services of the

Client/Server Architecture - . advent of client/server technology. in systems centralised around mainframe, a no. of dumb

Client-Server Network - . a network which consist of clients and servers. a network architecture in which each computer