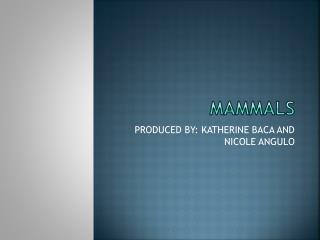 MAMMALS. PRODUCED BY: KATHERINE BACA AND NICOLE ANGULO. Mammals. An example of a mammal is a bear, which are members of the class Mammalia . All mammals breath air, have four-chambered hearts, and are endotherms that generate their body heat internally. . Evolution.

Mammals Characteristics - . by: will reynolds. mammals nurse their young. mammals have organs called glands that secrete

MAMMALS - . mammals are animals that have hairs, are warm-blooded, and nourish their young with milk. some modern-day

Mammals - . a mammal is a something that does lay eggs, therefore humans aren’t mammals. insects eat mammals. here are

Irish Mammals - . the wild goat (gabhar fia ) the  wild or feral goat is closely related to the sheep. there are not

MAMMALS - . characteristics body covered with hair as with the feathers of birds, and the “shed” of reptiles,

Diversity of Mammals - . 5 th grade . there are 3 main groups of mammals. these groups differ in how their young develop

Mammals - . learn all about these amazing creatures. by: alissa cattron. what is a mammal?. mammals are animals that have

Mammals - . class mammalia. small number of species ~4500 but probably more successful than most animal groups (except

Mammals - . characteristics of mammals. most mammals have hair or fur covering their bodies. mammals are capable of