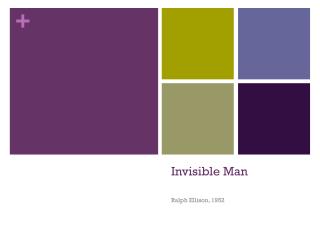 Invisible Man - . senior seminar: “techniques of the observer” may 17, 2011. on reading literature (at tuskegee,

Invisible Man - . intro. aleah, linnette, grant, the boy chapters (2-7). theme. sometimes when one is obedient towards

Invisible Man - . the use of humor as a literary tool i laughed and i trembled, and gained thereby a certain wisdom.

Invisible Man - . “what did i do to be so black and blue?” louis armstrong. independent reading. monday’s log:

Invisible Man - . motifs of violence. street confrontation - prologue. “one night i accidentally bumped into a man,

THE INVISIBLE MAN - . by ralph ellison. symbols: jack. communism in america blindness: glass eye sees with only one eye

Invisible Man Motif study… - . particularly track your assigned motif as you read. this is in addition to your regular

Symbols in Invisible Man - . there is an object on each person’s desk that represents one symbol from invisible man.