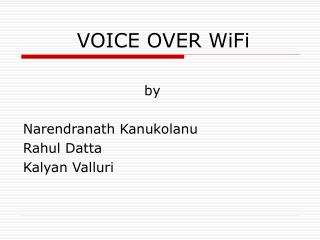 Monetizing WiFi - Special talk - how to monetize wifi with an

ROI Analysis of WiFi Offloading - . …the bad news is…. to offload or not to offload…. operators of mobile cellular

Voice Browsers - . generalmagic demo. making the web accessible to more of us, more of the time. sdbi november 2001,

Presbylaryngis: The Aging Voice - . by karen vanderploeg. prevalence/age of onset. the san diego center for voice and

In-flight Wifi Market: satellite technology use in airline wifi to grow at a rapid pace through 2021 - To get sample