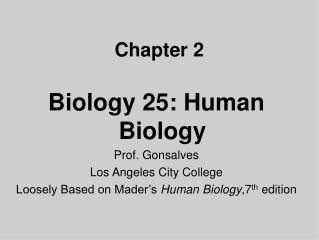 Chapter 2. Biology 25: Human Biology Prof. Gonsalves Los Angeles City College Loosely Based on Mader’s Human Biology ,7 th edition. I. Elements: Substances that can not be broken down into simpler substances by chemical reactions.