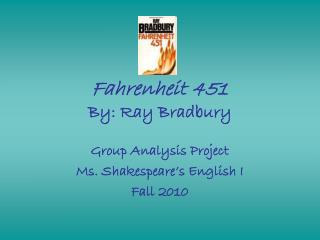 The Golden Kite and the Silver Wind - . by: ray bradbury powerpoint by: lily mccook, caroline willis, bailee decker, and

Introduction to Fahrenheit 451 - . by: ray bradbury. dystopia:. the future through the eyes of fiction writers. what is a

ConcepTest 16.1 Degrees - . 1) one celsius degree 2) one kelvin degree 3) one fahrenheit degree 4) both one celsius

What is the difference between freezing and melting - Freezing point. the temperature at which a liquid becomes a

FAHRENHEIT - . instructions: take a look at these hot questions about heat. get the most right and cool down with some

The ABC s of Fahrenheit 451 - . by. jason nagel. is for alarm mildred and her friends called in the alarm on montag

There Will Come Soft Rains - . by ray bradbury. unit learning intentions. to examine and analyse the characters in the

“There Will Come Soft Rains” - . by: ray bradbury. some terms you need to remember:. setting -  includes