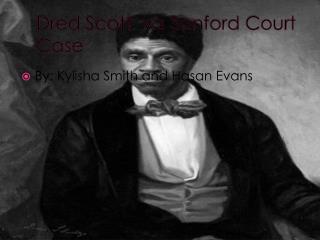 Dred Scott v. Sanford - What was a major landmark supreme court decision that angered abolitionists because it allowed

1846 Dred Scott v. Sanford - Scott, a slave, argued that since he and his wife had once lived in free states, they

DRED SCOTT CASE - . scott is a slave from missouri, taken to live in illinois (5 years in wisconson). no slavery

The Dred Scott Case - . lesson 18: the union in peril part 7. as new political parties formed, the north and south grew

The Dred Scott case - . goal:. what is the meaning of the dred scott supreme court case and how did it help lead to the

Dred Scott - . anthony halloran. who is dred scott. dred scott is a boy who grow up as a slave and wanted to escape every

Dred Scott - . by greg munetz. beginning of his life. he was born a slave in 1795 in southampton county, virginia he was

Dred Scott - . and the case for freedom. slave life. dred scott was born as a slave in virginia in 1795, and sold to

Dred Scott - Objective: to examine the importance of the lincoln – douglas debates and the dred scott decision. abraham

DRED SCOTT - Our presentation!!!. dred scott. by augusto and mickayla !. dred scott’s childhood. he was born in

Dred Scott - . background. scott was the slave of an army surgeon who took him from missouri to posts in illinois and