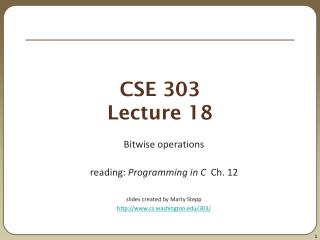 CSE 303 Lecture 18. Bitwise operations reading: Programming in C Ch. 12 slides created by Marty Stepp http://www.cs.washington.edu/303/. A puzzle. A king wishes to throw a grand party tomorrow in his castle. He has purchased 1000 bottles of wine to serve to his many guests.

Mandible &amp; TMJ Lecture - . rt 233 week 7. hello class, this is my preliminary lecture, i may add more slides over