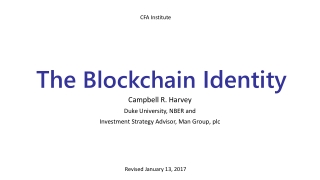 Blockchain-Based Identity Management - Lynked.world is a mobile/desktop platform that makes use of the blockchain

How Blockchain can help in Identity Management? - At the center of any business, engagement people are there. trust is

The Living Blockchain - . craig sellars, co-founder of omni tether vatomic blockv. what is a blockchain?

The Islamic Identity versus The American Identity - . can they coexist?. technology vs civilization. civilization is

Blockchain - At shamla tech solutions, we strive to bring 100% client gratification, robust security and reliability to

The Social Identity - . of scotland. the uk family: in statistics. families are changing shape and facing up to new

The Prophetic Identity - . viv grigg. the person of the holy spirit. ruach , the wind, the breathe of god, carrying

THE EUROPEAN IDENTITY - . ariadna perdigó oriol urgellès maria antolín. europe:. is a continent from the earth. her

The Canadian Identity - . one, two or many nations???. multiculturalism . 1918-1960 restrictive immigrations policy