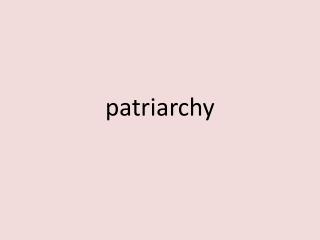 Gender Inequality - . introduction to gender inequality. there is no nation where women and men are equals. a history of

Feminist Theory and Class Consciousness - . the taming of the shrew. feminism. feminism |ˈ feməˌnizəm | noun the

Women in Afghanistan - . by: madison bradley. social system in afghanistan . afghanistan has a patriarchy, which means

Introduction to Feminist Theory - . moon hinga 2014. so what is it?. feminist theory is one of the major contemporary

Enter: Patriarchy - . today’s objectives (2). 1) define and understand what is the system of patriarchy contextualize

ExploringFeminism - . learning objectives:. to understand the meaning of patriarchy. to relate feminist thinking to range

The Emergence of Patriarchy? - . material arts as evidence. who invented farming?. observations of plant

Patriarchy and Violence against Women (VAW) - A brief biblical historical survey of the subordination of women.