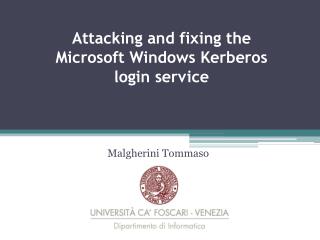 Attacking and fixing the Microsoft Windows Kerberos login service. Malgherini Tommaso. 2. 2. Kerberos – what it is (in short). Protocol for authentication inside an insecure network Client-server model, with a “trusted third party” for credentials distribution

MODERNISM - . “ modernism released us from the constraints of everything that had gone before with a euphoric sense of