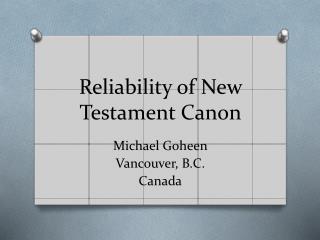 Reliability of New Testament Canon. Michael Goheen Vancouver, B.C. Canada. Starting with two texts. John 5.31-47: “These very Scriptures testify about me, yet you refuse to come to me to have life.” John 10.22-42: “My sheep hear my voice.” v.27. New Origins of Christianity. New Testament Canon - . three important questions. 1. why?. why was a canon needed? 1. christianity, like judaism was

Reliability of the New Testament - . why does it matter?. f f bruce. reliable as what? as god’s self-revelation in

The Canon of the New Testament - . and the da vinci code robert c. newman. dv code on the

THE FORMATION OF THE NEW TESTAMENT CANON (A.D. 100-220) - The history of the development of the cannon of sacred

Old Testament New Testament - God has singular commitment, no new institutional commitment the body of christ is a people