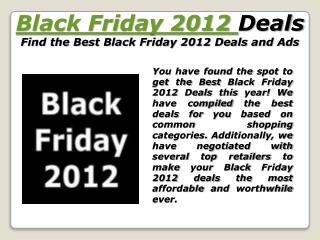 BLACK HOLES: The Other Side of Infinity - . presented by: sarah silva (ssu nasa) and phil plait. the show content. the

Black Friday - . is it worth it? videth delude. “black friday”. coined in 1960s to mark the kickoff to the christmas