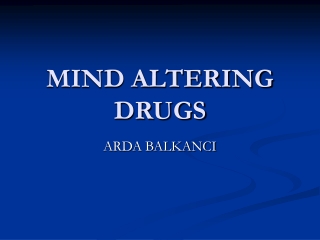 MIND ALTERING DRUGS. ARDA BALKANCI. Mind Altering Drugs. A hallucination is a mistaken notion, that is a perception or feeling that has no external cause. The word psychedelic means something causing an abnormal stimulation of feeling or conciousness. Mind Altering Drugs. Parental Abuse of alcohol and other drugs - . the relationship between substance abuse and child maltreatment by beth

The Biomedical Therapies - . therapies aimed at the altering the body chemistry. psychopharmacology. the study of the

Understanding Drugs and Medications - . what are drugs? where do drugs come from? what are the different kinds of drugs

Common Drugs &amp; Their Uses - . chapter 18 bcc pharmacy technician . objectives. at the completion of the study the

Week 6 Drugs Awareness - . parental engagement project. session outline. in today's session you will learn: what are

PART 7 : Stimulants - The next seven sections of this lesson deal with various categories of psychoactive (mind-altering)

MIND-ALTERING DRUGS - . “but the man who comes back through the door in the wall will never be quite the same as the

Staying Healthy - . to do your best in college, you need to be of sound mind and body. which leads to the subjects of sex

SUBSTANCE ABUSE AND DEPENDENCE: An Overview - . rnsg 2213. introduction. substance abuse is not a new problem.

Hallucinogens - . hallucinogens. a group of mind-altering drugs that affect the brain and nervous system, bringing about