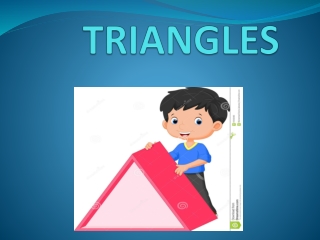 In this presentation i have made the details of triangles

Triangle - . a polygon with three sides and three angles. a triangle can be names by its’ side lengths and angles. side

TRIANGLE△ - . who are we. we are a clothing company stocking only the finest threads (clothes) and accessories . have

Triangle - Each segment that forms a polygon is a side of the polygon . the common endpoint of two sides is a vertex of

Triangle - . definition. triangel is a equilateral which have three straigh sides and three angles. types of triangel.

Rhetorical Triangle - . warm-up. today is day 54, 12/5 1 sheet of paper can you effectively persuade others to agree with