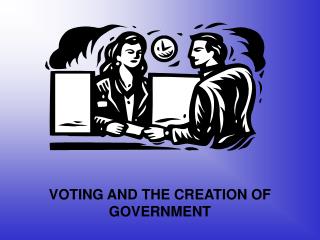 VOTING AND THE CREATION OF GOVERNMENT. VOTING: RIGHT OR RESPONSIBILITY?. Citizens are guaranteed the right to vote under the Canadian Charter of Rights and Freedoms. It is a very important right that should be exercised by all citizens. The Creation of the Federal Government - . unit 2. sec.1:roots of american government. a. an english political heritage

Constitutional Era – 1787 – Creation of the U.S. Government - This era evaluates the strengths and weaknesses of the

18. Public Goods, the Consequences of Strategic Voting Behavior, and the Role of Government - . 18.1 public goods and the

The Rights and Responsibilities of Voting - . by tommy knockenhauer. when voting, you have the right to share your

THE POLITICS OF VOTING - . chevalier winter 2014. the right to vote. suffrage or franchise is a synonym for voting and

The Importance of Voting - . the right to vote. history of suffrage in u.s. (who could vote at the time and how did

The Mathematics of Voting - Chapter 1. the mathematics of voting. sec 1: preference ballots and schedules. voting theory

The Importance of Voting - . nathaniel rogers principles of communication august 21, 2012. the declaration of

The Creation of the First Government of the United States: The Articles of Confederation - . we need to begin with a

The Technology of Voting - United states election assistance commission. making every vote count. the technology of

The Media and Voting - . the media is a collective term which covers a whole range of communication means including t.v.,

Banks and the Creation of Money - . financial intermediary: go between borrowers and lenders. take deposits and give out

The Importance and Creation of Resolutions - . overview. what is a resolution why are they important where do they

The Creation and Diffusion of Culture - . chp.17 with duane weaver a look at how our culture creates meanings and how

The “Creation” of Childhood and Delinquency - . early conceptualizations of

The “Creation” of Childhood and Delinquency - . the “invention” of delinquency. eighteenth century understanding